World Champion Magnus Carlsen has won many games thanks to his legendary endgame technique, enabling him to steer a very slim path to victory even at the very highest level. Indeed, a forthcoming book (due out in July) called Endgame Virtuoso Magnus Carlsen will deal with this very subject.

However, even the world’s best player can make simple mistakes, especially when the pressure is on.

Yesterday saw the launch of the 2018 Altibox Norway Chess tournament and the world’s elite players played a blitz tournament prior to the main event, which starts today. Magnus Carlsen will feel disappointed to finish fourth out of the 10 players (Wesley So was the winner) but his score would have been higher if he had not made a big blunder against Levon Aronian in a comparatively simple endgame position. 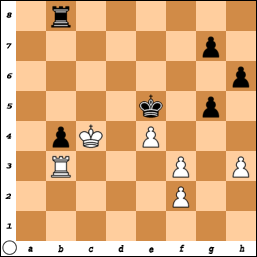 White’s king and rook are holding back Black’s passed b-pawn but they cannot stay there forever, especially as Black’s king is in such a strong position. Carlsen decided to capture the pawn and head for a king and pawn ending.

White is a pawn up, which is often a decisive advantage in a king and pawn ending. However, it is clear that Black’s king is in a much stronger position than White’s and also both sets of pawns have their weaknesses.

It is tempting for Black to play 49 …Kf4 to get in amongst the white pawns, but it is a faulty plan. White would reply with 50 Kc5 and if 50 …Kxf3 then 51 e5 and the e-pawn will march on to promotion. Aronian’s move, shouldering the White king away from the action, is instructive.

Now Black has a threat. If the White king marks time with 51 Kb4, 51 …h4! sets up 52 …g4! 53 fxg4 Kxe4 and Black’s king will destroy the rest of the white pawns with an easy win. Carlsen spots the danger and finds the best move.

Black realised the initial plan of 51 …h4 is no longer winning as after 52 Kd2 g4 53 fxg4 Kxe4 54 Ke2 the white king is in the right place at the right time to protect his pawns. Aronian tried something else. 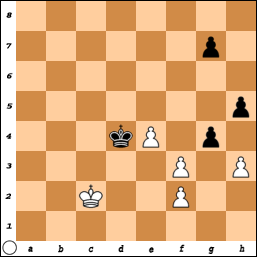 This should now be a draw. After the sample line 52 fxg4 hxg4 53 hxg4 Kxe4 54 Kd2 Black will be able to win the g-pawn and it will leave a position with a king and one pawn each. Neither side would have a passed pawn and a steady advance will merely lead to a swap of the pawns, leaving just king against king. However, when the pressure is on (this was a blitz game, don’t forget; both players were very short of thinking time) the chance of big mistakes is always raised. Carlsen’s next move is a big blunder.

Aronian’s reply showed why this was wrong.

Unfortunately for Carlsen, his king is now ‘outside of the square’ and it cannot prevent the h-pawn from becoming a new queen. Despite being two pawns ahead he had to resign the game; 0-1

‘The square’ can be assessed by drawing an imaginary line from the pawn to the queening square (h1) and extending the line to the same number of squares to the side of the pawn (e4). The square is completed by another imaginary line dropping from e4 to e1. If the white king can enter the square right now then it can stop the pawn.

If Carlsen’s king had been just one step closer to the action it could have entered the square and spoiled the h-pawn’s fun. 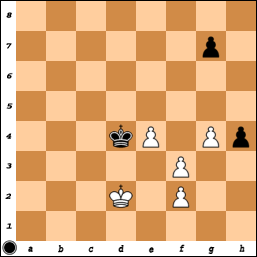 Now it is easier to calculate: 53 Ke2! h3 54 Kf1 h2 55 Kg2 and even though the pawn can still touch down the king can simply capture the new queen.

You can follow the news and games from the tournament in various places, including the official website.