Once children discover how to play for the four-move checkmate they rarely want to do anything else in their games.

We all know the moves; they spread like wildfire through our junior tournaments. There are slight variations, but typically the games begin like this. 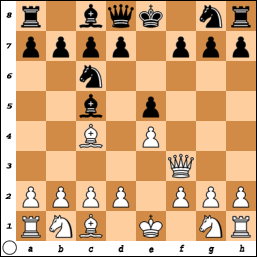 One of the players then smiles like the Cheshire Cat while the other is left confused and sometimes in tears.

Certainly, Black should be able to learn how to stop this from happening again, although in reality some children will still fall repeatedly for the same thing. I remember the days of my own school chess club, when someone discovered this quick checkmate and for several weeks we thought chess was a forced win for White. We would go home having drawn 6-6 or sometimes even more.

Short-term fun does not lead to long-term improvement. It is a false economy.

Players who win in this way have a lot of fun and may even win tournaments with this very basic checkmate. However, they will eventually be found out and when everyone in their circle eventually learns how to stop falling for it they will be left with a problem. All of their opponents will have developed far more in their general game and the player who has done little else but win in four moves each time will find they have been overtaken by the people they used to crush. Suddenly, the Cheshire Cat smile has been replaced by their own tears. Their tournament scores plummet along with their conference and the will often drift away altogether. Children should be discouraged from playing in this way, but it is not easy when all they want to do is win.

In a future blog we will look at ways in which Black can prevent the four-move checkmate once and for all with a few simple, sensible moves.