Last time in our investigation of this fascinating new book, we saw Alpha Zero squeeze the ‘life’ out of Stockfish 8. This time we will see an example of a much more direct attack, with the two bishops proving to be an especially strong team. 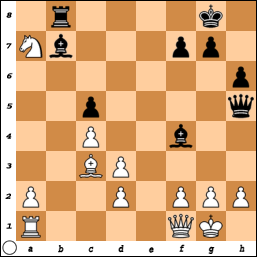 White is three pawns ahead and at our level of chess that is normally a winning advantage. Yet Alpha Zero has excellent attacking chances by way of compensation. The black queen and the bishop pair are working so well together, with lots of open lines towards the white king. We have probably all experienced – many times – games against computers in which we think we have a good attack going in return for material, only to find the pure calculating power of the machines has seen far deeper and the attack turns out to be completely insufficient. With Alpha Zero in charge of the black pieces we can be sure the attack is worth the sacrificed material. Stockfish 8 is very strong too – but one of them must be misjudging the position.

24 h3 which prevents the threatened 24 …Qxh2 checkmate and, according the authors, ‘gains the defensive resource of Qd1 followed by Qg4, breaking up the attack.’ Indeed, if White can force a straightforward exchange of queens then Black’s attack will not be worth three pawns. The attack will also be greatly reduced in strength if the black queen has to retreat from the action’s front line, so at first impression it looks like Stockfish is doing everything right. But Alpha Zero has one more card to play…

24 …Ra8! We are always told to try the make most of all of our pieces. Looking at the position given above it would be hard to imagine the black rook could possibly play a decisive role in a kingside attack, but it doesn’t take very long at all for it to find a route into the action.

25 Qd1 ‘Stockfish blinks! It clearly saw something it didn’t like after 25 Nb5 and decided to bail out bit the resulting position is awful.’ Indeed, after 25 …Qxd1 the queen swap turns out well for Black as 26 Rxd1 Rxa7 wins the knight. This is how the game went and Black won on move 48. Stockfish suddenly spotted the greater danger and it would have been a sensational attack by Alpha Zero.

If, instead of 25 Qd1, White had played the more obvious 25 Nb5, to save the knight and maintain the three-pawn advantage, Black would really have shown its attacking teeth with 25…Bf3!! 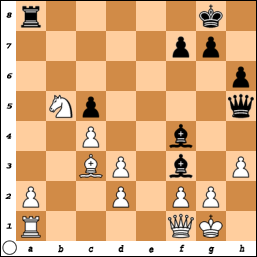 I don’t want to bombard the reader with variations but the very basic point is that Black has now prevented the defensive resource 26 Qd1, simply by attacking that square with the bishop. This buys Black enough time to bring his rook over to the action with …Ra6 and then …Rg6. The book proves that Black’s attack is winning, whatever White tries to do. One sample line is particularly eye-catching. 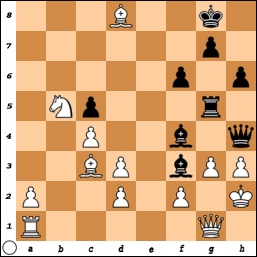 Black is definitely getting the best out his pieces!

Imagine you are Black and your opponent plays (for example) 31 Re1. Can you see how to force checkmate – in two moves?

Additionally, how would you win if White plays 31 gxf4…?