Back in June, we focussed on the four-move checkmate (often called ”Scholar’s Mate”) and said we would return to see how easily it can be prevented.

It seems the update will be too late for some, as examples of this early catastrophe are still coming through – event though they sometimes take slightly more than the traditional four moves.

The recent Batumi Chess Olympiad (Olympiads are world team championships, held every two years) showed that even players representing their countries are not immune to letting down their guard and losing very quickly to a fatal queen check on f7, as in the following game, played in round 6 of the Women’s event.

Nothing wrong so far. Black is playing the Modern Defence, which allows White a lot of extra space, but is a perfectly respectable counter-attacking opening.

White’s second move is unusual against the Modern Defence (seizing the centre with 2 d4 is more popular) but it gives an indication that f7 will be an early target. 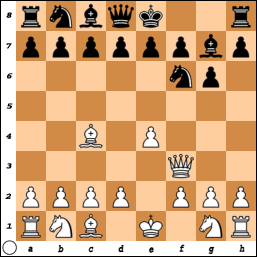 3 Qf3 is definitely not the best move but Black reacts badly. 4 Qxf7 checkmate is prevented by the knight blocking the queen’s path, but the knight’s position is unstable and it can easily be chased away. The bishop’s diagonal had to be blocked and 3 …e6 would have been a suitable way of doing it. White’s queen would then have been a target for Black’s pieces (for example, an eventual …Nc6 and then either …Nd4 or …Ne5 would have gained valuable time by attacking the queen.) 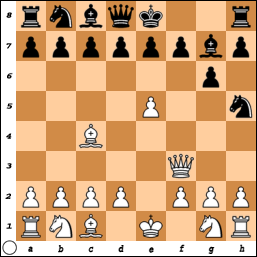 White finds the weak point in Black’s idea. If the knight tries to remain on f6 it will simply be captured by the pawn. However, moving the knight is even worse because the path to f7 is cleared.

We’ve all been victims of similar Qxf7 checkmate ideas. The only good thing about falling for this checkmate is that the lesson should stick in the mind and the disaster should not happen to the same player twice.

We will return to the subject again later, but for readers worried about the prospect of losing so quickly to this standard attack I can recommend playing the French Defence. 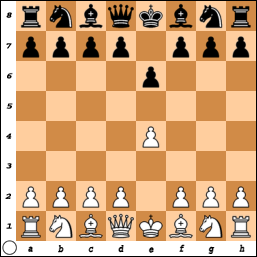 White will have lots of trouble checkmating the Black king quickly now, as even if the bishop goes to c4 then it cannot protect the f7-square as its path is blocked by the e6-pawn. Try 1 …e6 against the well-known checkmates at school and watch their smiles drop!