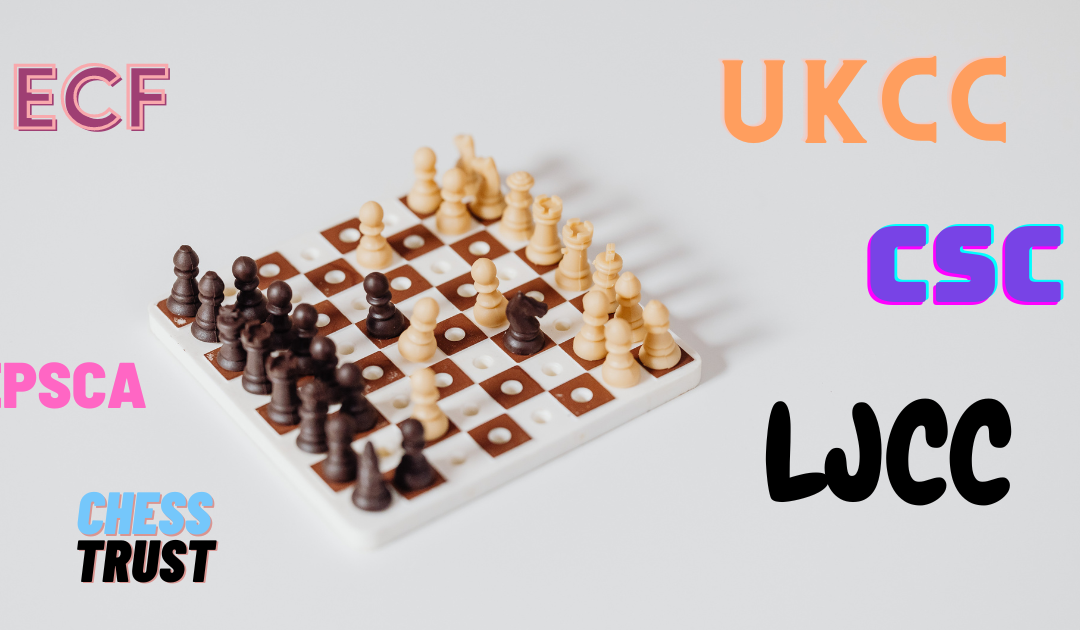 Junior chess in England is loosely structured with many competing organisations offering competitions and training. This document aims to make some sense of this and give parents some guidance as to which junior tournaments are worthwhile.

The ECF is England’s governing body for chess and organises the British Championships along with other events. It is responsible for selecting and fielding national teams (juniors, open and seniors) and also operates the ECF Rating system – which is a ranking system which allocates a rating to players based on their results.

Chess in Schools and Communities (CSC)

CSC is a charity whose mission is to introduce chess to schools, inner city communities and to raise the profile of the game. They run school lessons in around 200 schools in England as well as various other community projects. The charity also organise the London Chess Classic and in 2021 and 2022 “Chess Fest”.

One of the longest running junior chess organisations – EPSCA have been running junior chess events since the 1960s. The website unfortunately is rather outdated and it can be difficult to understand their activities but their network of ‘EPSCA Associations’ have endured for many years and they continue to run much loved events such as the National Primary Schools Chess Championships and Inter Association Championships (see team events).

EPSCA run an ‘England Under 11 Team’. This unofficial team is somewhat controversial and it can be very confusing as it has nothing to do with the official England Team selected by the ECF, and EPSCA make no attempts to make this clear! However EPSCA have played a tremendous role in English junior chess throughout the years and many junior player has been thrilled to earn a place in their squad (including the Director’s of the UK Chess challenge)!

EPSCA have a somewhat convoluted system of norms and selection criteria to qualify for their squad – again the website isn’t much use so it would be useful if an intrepid parent could collate a list of norm qualifying events and squad events. It should also be noted that EPSCA organise far fewer international trips and events for their squad than used to be the case – partly due to changes in safeguarding expectations.

The Chess Trust manage a number of funds which have been setup to benefit English chess in general and some of the larger funds specifically to promote junior chess. The Chess Trust current operate the ‘Accelerator Programme’ which is the top rung of the ECF’s Junior Development Pathway. Only a small number of ‘elite’ junior players are selected to receive support from the Accelerator Programme and candidates must apply via the website. Successful applicants receive coaching support as well as financial support to play in competitions and invites to attend special trainings.

The 4NCL run a number of team and individual competitions as well as the Junior 4NCL – a very well organised junior team league. Their flagship event is the 4NCL which is an Open League which convenes for 5 weekends a year and features several divisions including a very strong first division. They also organise individual FIDE rated tournaments.

Rough Overview of the Structure

However to date they have either failed to create a cohesive regional structure or decided not to. Other organisations have arguably attempted to fill this gap and so what we have in English chess is a lot of organisers and tournaments but a fairly loose overall structure. This has pros and cons. One of the main disadvantages of the current situation is the innate difficulties a newcomer to the English chess scene typically has trying to make heads or tails of it all. Hopefully this document will assist in understanding the junior scene a little.

Up until now perhaps the best way to learn more about the junior chess scene is to talk to other parents or organisers although even here knowledge will likely be patchy.

The ECF have recently launched the Junior Development Pathway which is an attempt to formalise to some extent the provision of coaching and training to junior players. It remains to be seen how many clubs and organisations decide to register for this scheme and whether it will therefore be adopted by the wider junior chess community.

Please note this only covers junior tournaments. Please see our Adult Tournament page for information about adult (or ‘open’) tournaments.

The UKCC run the is the largest competition in the UK and the latter stages are arguably the strongest. It is a ‘multi-stage hybrid’ competition with players having to qualify to each stage and events taking place across the UK as well as online.

We may be biased but we believe this is the best run and most prestigious junior competition in the UK – with the Challengers and Terafinal in particular being extremely strong.

These are highly prestigious championships played using classical time controls. There are no qualification criteria so any junior chess player can enter – though they tend to be strong events.

The LJCC is an annual competition (run by the LJCC Charitable Trust) runs qualifying events from August with a finals in December. Some of the older stages do not require qualification.

Players do not need to be based in London to take part but there are special prizes for London based players. The qualifier events tend to be rapidplay whereas the finals are a mix of rapidplay and classical depending on age group.

This is a popular and well established competition (apparently the first event was the 1924 London Boys Championship). The organisation of the event and the website are a little dated with some complicated rules and apparently no means of registering online. Perhaps the best approach is to email the organisers directly.

Many other local level junior tournaments are run and details of these can often be found on the ECF calendar. Some organisers run ‘Grand Prix’ series or qualifying competitions for their local teams (often County level teams or EPSCA Associations).

This is a professionally organised junior team league (18 years old and below) which meets three times a year at selected hotels for a weekend. This is a good opportunity to play several games of classical chess in a team environment. Currently there are two different divisions. Full rules for 22/23 here.

Traditionally the event was held over three phases with a local zonal, a national semi-final and a final. Following covid the 2022 event was shortened by removing the semi-final stage.

To enquire about the event please contact the organiser Angela Eyton npscc@aol.com. Unfortunately the EPSCA website isn’t much help at the moment but hopefully they will start to improve this aspect under new management. Participation will rely on the school entering a team – as a parent wanting to encourage the school to do so it is likely you will need to volunteer to manage the administration and travel arrangements to the nearest zonal event, or possibly even run the zonal event!

Another popular team event run by EPSCA, the Inter-Association championships are team events held at County level (counties registered with EPSCA). There are separate championships for U11s, U9s and U9 girls.

This is a two-stage event with regional heats (zones) typically held in March with the finals in April or May. In 2022 there were two zonals: North (7 teams) and South (9 teams).

To find out which EPSCA association you are eligible for you could try contacting the EPSCA secretary Nigel Dennis secretary@epsca.org.uk. Even if you don’t intend to play in these events it may be worth finding out who your local organiser is and whether they are running other events.

It must be said that the activity and quality of junior associations varies massively across the country and therefore it is a bit of postcode lottery as to whether your association is currently active or running teams in this event.

If you have any questions please contact us at admin@ukchess.co.uk